Praise for The Facefaker’s Game 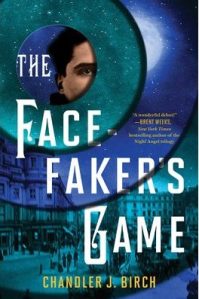 “It takes a special writer to blend Dickens, Sanderson, and Lynch — and yet make it totally his own. Chandler Birch succeeds beautifully. A wonderful debut!”
—Brent Weeks, New York Times bestselling author of the Night Angel trilogy

“As fun as Mistborn. The writing is effortless, the pacing quick, and the characters delightful.”
—Stephen S. Power, author of The Dragon Round

Ashes is a liar first, a thief second, and a beggar when nothing else will do the trick. He spends his days picking pockets and dodging folks he’s cheated, all the while paying dues to Mr. Ragged, the brutal slumlord whose word is law among the gutter-rats of Teranis.

He needs a way out—and he finds one when he attracts the attention of Candlestick Jack, an enigmatic magician in search of a burglar.

Under Jack’s tutelage, Ashes studies the magic of illusion as well as the arts of the upper-class criminal. Armed with raw cunning and newfound skills, Ashes helps Jack plan the most audacious caper their city has ever seen…and sets his own talents toward a private war with Mr. Ragged.

A dramatic adventure story full of wit, charm, and scheming rogues, The Facefaker’s Game takes you into a world you won’t soon want to leave.